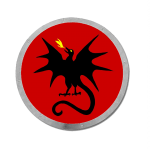 Drafn is a warband in the SCA, in the kingdom of Caid, in the Barony of Calafia (San Diego, California). The Society for Creative Anachronism is a medieval re-enactment group, which selectively re-creates the historical period from approximately the latter Roman era to 1650 A.D. We seek to learn about the beauty and chivalry of our past and to share with others the wonders of medieval Europe. We re-create the fun parts, like the feasts, costumes, & sword fighting (but leave out the parts like plagues, lice and beheadings).

Drafn was formed in 1979 and specializes in recreating the Norse culture. Its goals are to promote the SCA, provide our kingdom with a well-equipped fighting unit composed of gentlepersons, to provide a lively and interesting picture of the Varangian Guard and Norse culture, to promote the art of Rattando, to sustain a period encampment of the Viking Age, and to have parties.

Drafn is a contraction of the Old Norse words “dreki” and “rafn” – dragon and raven. Lady Chloe designed the wyvern-like emblem that we carry on our shields. At least two medieval towns, one on the Oslo Fjord in Norway and another on the banks of the Volga River in Russia were named Drafn. The name means something like “place where driftwood washes up on the shore.”

Drafn is not a secret society or an exclusive social clique. Membership is open to anyone of good character who shares the group’s interests.

What is the SCA:  SCA stands for the Society for Creative Anachronism. It is a non-profit educational organization devoted to the study of the Middle Ages and Renaissance. It was started in 1966. It includes over 20,000 paying members in the US, Canada, Great Britain, Sweden, Finland, Germany, Italy, Okinawa, New Zealand, Australia, Iceland, the Netherlands, Scotland, Ireland, and Spain (there are probably three or four non-paying members for every paid member).

The SCA is part of the “living history” movement, which means that members try to reproduce various aspects of the culture and technology of their periods, as well as doing more traditional historical research. There is a king and queen crowned every six months that rule each kingdom.

Activities: The SCA sponsors numerous events such as tournaments, art exhibits, competitions, classes on all manner of medieval skills, workshops, medieval feasts, wars etc. At most of these events members dress in medieval and Renaissance costumes, and participate in activities based on the civil and martial skills of the period. Tournaments and wars are two of the most popular SCA type of events attended.

Areas of Interest:Combat is one of the largest areas of interest in the SCA. Members fight with swords (made of rattan), pole arms, bow and arrows, etc. and wear real armor (made of leather, metal, plastic, padding, chain-mail, etc.) and fight in single combat or team battles (known as melees). Other areas of interest include brewing, cooking, dancing, needlework, jewelry making, archery, heraldry, manuscript illumination, calligraphy, costuming (garb), etc.

Non-Fighters:Even if you’re not interested in fighting, the warband has a place for you. Non-fighters are needed to run the night feasts, bring water and food out to the fighters, help run the camp, hold the ceremonies, edit the newsletter, sew garb, make armor, etc.

Tourneys: There is usually a tourney held every month. This is an event held during the day. People set up pavilions, dress in medieval garb, and fighters fight in the middle of the event in a roped off area. There are usually contests for non-fighters to do, and general socializing.

Wars: These are overnight events, lasting anywhere from two days to a week. There is a large fighting field where fighters fight in melees (groups). Besides fighting there is shopping, feasting, other competitions, and general partying.

Our Camp and Fighting: Drafn gets together several times a year at SCA wars. The warband sets up a period looking Viking camp (including A-frames, rowing benches, Drafn war shields tables, etc.), and dress up like Vikings (or in other medieval clothing, also called garb). Drafn also puts on armor and fight together in the battles. Drafn fighters fight using a shield, a pole arm, or crossbow (the Agamundi or archers).

Other Activities: Drafn has several other events throughout the year, including barbecues, toga parties, beach parties, an annual Yule party, and more.

Drafn Anniversary: is held now in the summer. It is the social event of the year for Drafn and includes many fun events such as, archery, axe throwing, hammer toss, spear throwing, garb contest, tequila crossbow, boffer contest, war tourney, saga contest and more.

Getting Started: It doesn’t take a lot to get started. You don’t have to have Viking A-frame and a full set of armor. At a war all you need is what you usually take with you when you go camping, plus some sort of medieval garb. You can even borrow some garb for your first war. Or if you come to a tourney, all you will need is your picnic lunch, and some sort of medieval garb.